Marcos de Quinto became the Chief Marketing Officer of The Coca-Cola Company on January 1st last and as such became the highest level global marketing executive in soft drinks brands. Only two months later was he promoted to the position of Vice President.

Before becoming the president of Coca-Cola Spain in the year 2000 he had previously held different positions in marketing in Spain, the southeast and west of Asia and in Germany. He also carried out the function of General Director in Singapore and Malaysia.

De Quinto, who has a degree in Economics from the Compultense University of Madrid, began to work in the multinational soft drinks industry in 1982 and from this moment onwards, continued to progress and assume positions with more responsibility.

Muhtar Kent, president and CEO of The Coca-Cola Company highlighted the leadership skills of Marcos de Quinto stating: ´in the positions he has held he has brought a strong global vision and strong operational experience´
As he has stated many times, De Quinto earned his first salary as a ski instructor working on the slopes in France in the Pierre Saint-Martin region. Not long after this he worked in a pizza restaurant in London and in reinsurance.

Ten months after his arrival at The Coca-Cola Company in Atlanta, DIRCOMFIDENCIAL had an exclusive interview with De Quinto. As one of the most renowned and admired executives of recent times, De Quinto was, as always, down to earth and talked openly in his responses to the questions.

«It is always difficult to leave a position such as the one I had with The Coca-Cola Company in Spain, where the team functions like clockwork….»

How have you managed the changes that you have taken on in your responsibilities in the head office of Coca Cola in Atlanta, leaving behind the Spanish market, etc..?

It is always difficult to leave a position such as the one I had with The Coca-Cola Company in Spain, where the team functions like clockwork….but my new position is fulfilling and less complicated than predicted. In 2016 we will see all the work that has been achieved in recent months in Atlanta.

Have you bought a return ticket home?

Of course I will return, but to have a rest….I think I am worth it, don´t you think?

«Each time someone has wanted to ´interfere´ with the brand, things have not gone to plan. Coca-Cola needs to return to being what is has always been»

Could you summarize what your responsibilities are now?

The title of my position is Chief Marketing Officer, and I am responsible for the global marketing of the company, marketing for excellence. At the same time I am the Executive Vice President of the company. My responsibilities are straight forward, to ensure that The Coca-Cola Company is one of the few companies ´in growth´ that is capable of maintaining positive and sustainable income and profit.

The key question: Do you think that Coca-Cola will need to evolve as a brand?

Each time someone has wanted to ´interfere´ with the brand, things have not gone to plan. Coca Cola needs to return to being what is has always been, Coca Cola, a soft drink whose flavour is unmistakable: a simple pleasure available to everyone without any great pretentions or sense of grandeur, its greatness lying in its simplicity.

I imagine that you will now be observing Pepsi, your main rival, more intensely.

Pepsi is more of a travelling companion than a rival, in a world that is becoming more complex every day and where all soft drinks are competing with each other….and not always in a very fair way.

Are you proud of your legacy in Coca-Cola in Spain? Did you leave behind any unfinished business?

I feel very proud of what I achieved ´with my team´…and what is more to have contributed to the Spanish botting company avoiding being taken over by other bottling companies and in fact being recognized for its continued dedication and hard work throughout its history. As a result, Sol Daurella will become the president of the new European bottling company, so we should all feel very, very proud.

Do you continue to believe that creativity can be found anywhere?

Creativity, good creativity, comes from people who are exceptionally creative…and they can be in ´anywhere´. And in Spain there are many, thankfully.

Lots has been written about the search for a new model of advertising agency that would be capable of catering to ever more experienced customers in a dizzying market…what do you think will be the model of the future?

The publicity model of the future will be one that is not attached to any model in particular. It will be sufficiently flexible and adaptable to be able to make a bridge between customers who generally tend towards immobility, and citizens and media that unfortunately evolve too quickly for us.

Your departure has coincided in part with the crisis of the involuntary redundancies in the Coca-Cola factory in Fuenlabrada…Do you think it could have been possible to better communicate and negotiate this crisis?

I am certain that these things could have been done better, it is always possible to do things better. But what I have noticed is that the CC Iberian Partners bottling company have shown complete generosity regarding the financial situation of their workers which is in stark contrast to the lack of ability demonstrated in highlighting that generosity in the communications plan. From the beginning, this redundancy plan was a reaction against the recently passed Labor Reform law, given the fame of the brand (which in fact, had nothing to do with it). I think that the workers at Fuenlabrada acknowledge that they used a brand that was not responsible for the redundancies to generate publicity and put pressure on a bottling company that, even though it was making a profit, needed to restructure to be able to survive against other European bottling groups.

How do you see Sol Daurella as the new president?

I have always known Sol as someone who is completely technically prepared and with an admirable humane attitude. He has Coca-Cola in his blood as did his father José Daurella, with whom I had the luck to meet, and like his father before him, Santiago Daurella, who was the pioneer of the Coca-Cola bottling company in Spain. His skills in “high diplomacy” not only protected his bottling business in Coca-Cola in Spain but also allowed him to ensure Spain was the leader in the merging of bottling companies in Europe and that is something we should all be grateful for.

And now how do you see the situation? How do you evaluate the macro merging of Coca-Cola bottling companies in Europe?

It was necessary. No corporation survives with an uncoordinated structure, with a structure full of duplications, inefficiencies and that turns its back on latent and obvious synergies. Coca-Cola competes in Europe with systems that are completely integrated and efficient. Given the importance of our brand, we can no longer allow isolated operational islands and extra costs if we want to be truly competitive. Which in truth is what our clients demand and what we owe them.

«The macro merging was necessary. No corporation survives with an uncoordinated structure, with a structure full of duplications, inefficiencies…»

Did it surprise you that the new mayor of Madrid didn´t allow the use of a local sports center for the shooting of a Coca-Cola advert because of the redundancies?

The Coca-Cola advertising campaign has been filmed in many cities around the world. I think I am probably right in saying that a few of those were probably filmed in Navalcarnero and Barcelona. I am from Madrid and I would have liked Madrid to have been included in our budget. Sometimes the ignorance of the people who organize our lives means that playing to the gallery is valued more than the real interests of the city they govern. My point is that once again demagogic impulses have defeated real intelligence. In my view it is not important, but I hope that in the future these types of cases will be reconsidered. I mean this in the interest of Madrid and not for Coca-Cola unfortunately.

When, far into the future, you retire, have you thought about what you might do?

I think I will try and regain my personal life that was stolen from me…or maybe I allowed it to be stolen, now I am not sure. 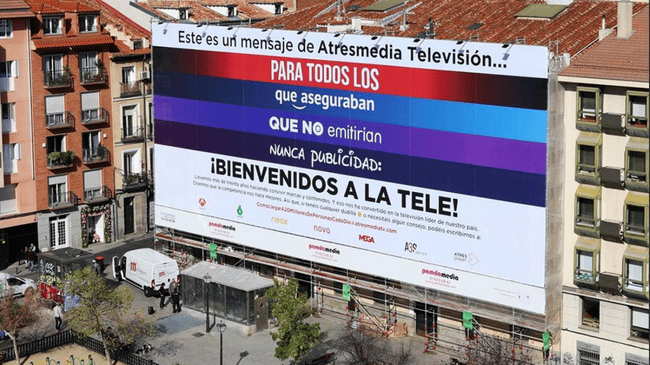